January is always a great month for me because…

2. It’s a month devoted to Minnie and rockin’ the dots! 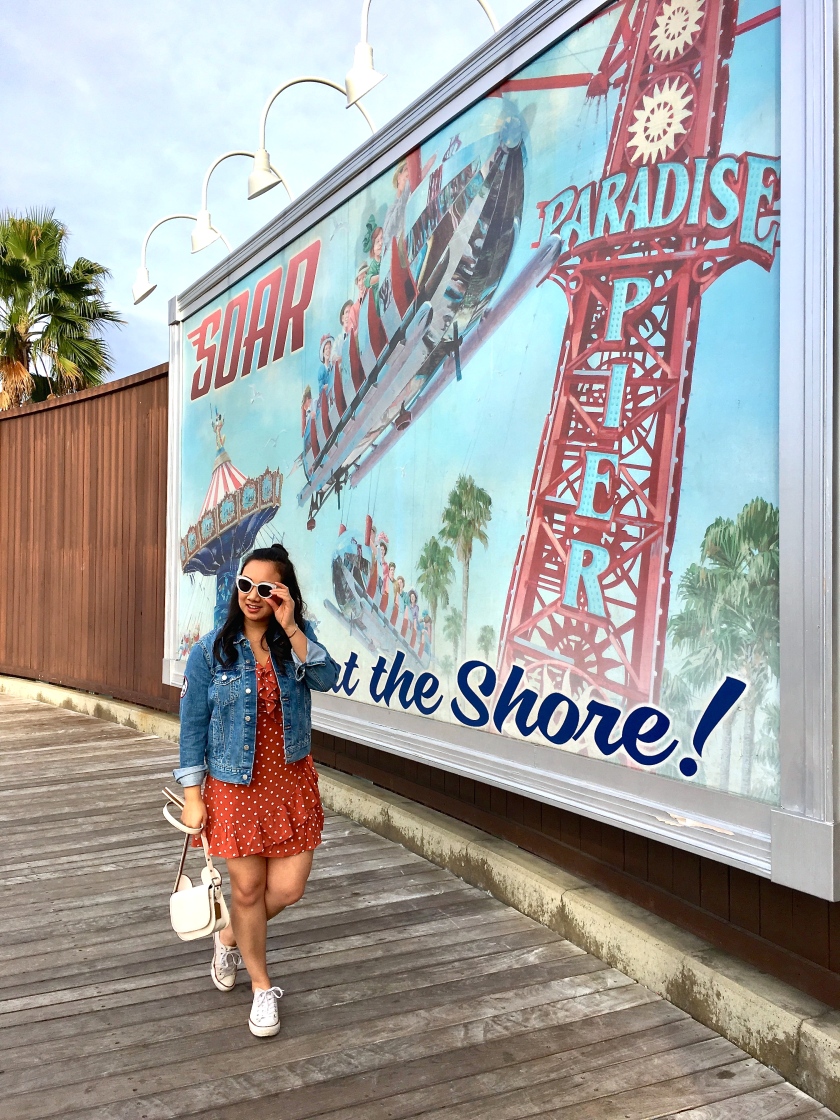 But this is post is going to be about Minnie (and some Minnie inspired outfits), not my birthday shenannigans. 😉  In fact, Minnie had a “facebook worthy” life event when she received her star on the walk of fame earlier this month!  And honestly, it’s about time! 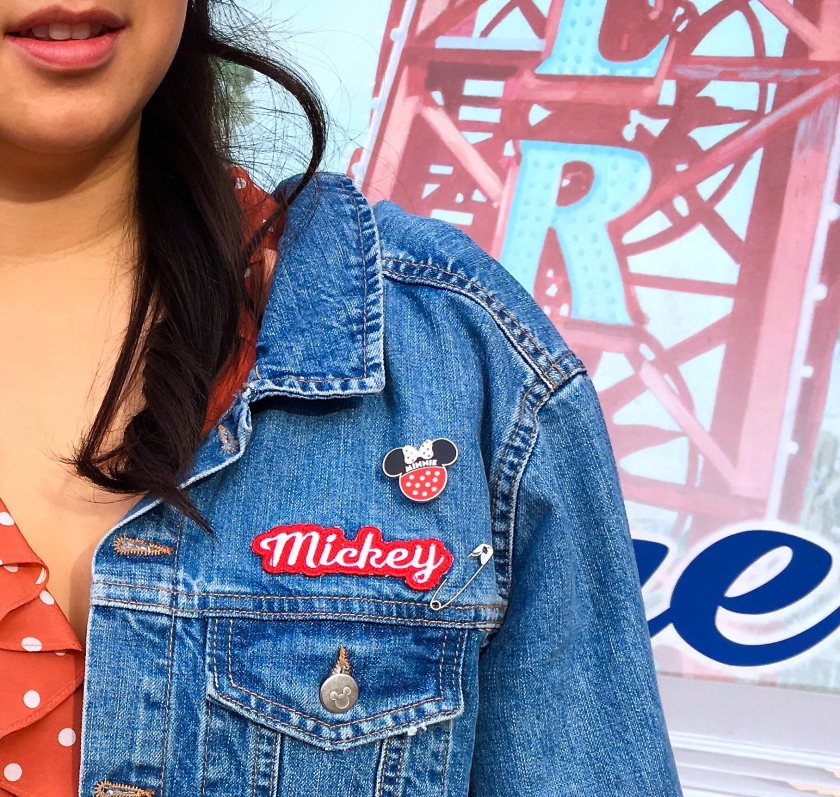 Mickey got his star back in 1978, but Minnie was only nominated for her own star just a few years ago. And in the wake of the #TimesUp movement, I’m sure the Hollywood Chamber of Commerce felt pressure and saw the perfect opportunity to show support.  More about how Minnie had to wait 40 years before getting her star here! 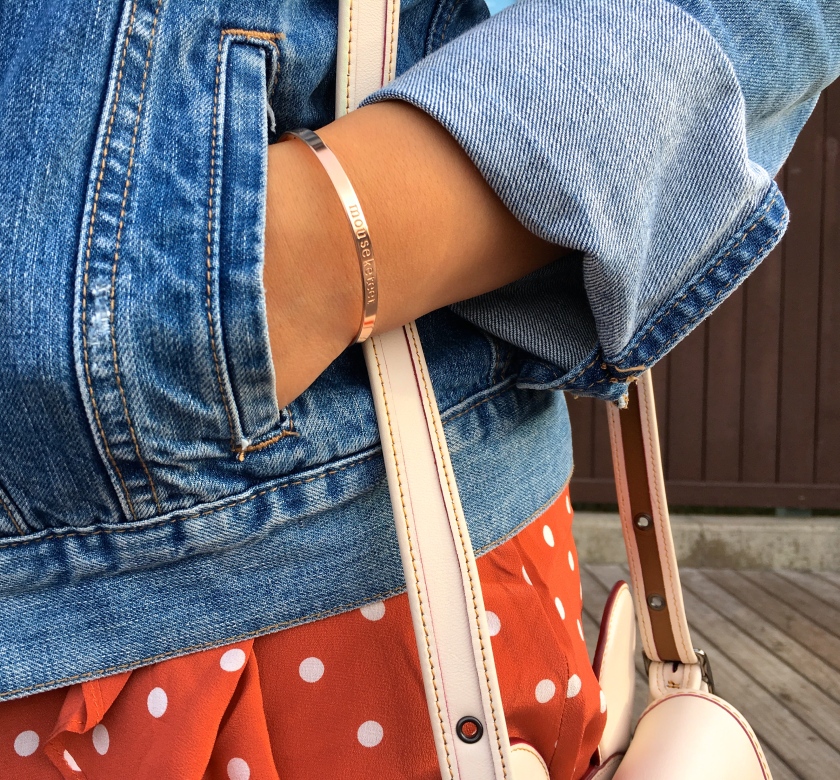 And I’ll be honest, I tend to choose Mickey over Minnie; especially when it comes to merch and disney fashion.  And that’s usually because I find Minnie to be a little too girly for me.  Don’t get me wrong, I’ve got love for Minnie and everything she’s done.  But when it comes to girly, I’ve mentioned in previous posts how I tend to shy away from it.  When you’re a short asian and look “doll-like” in girly clothes, people tend to treat you more like a child rather than an adult. 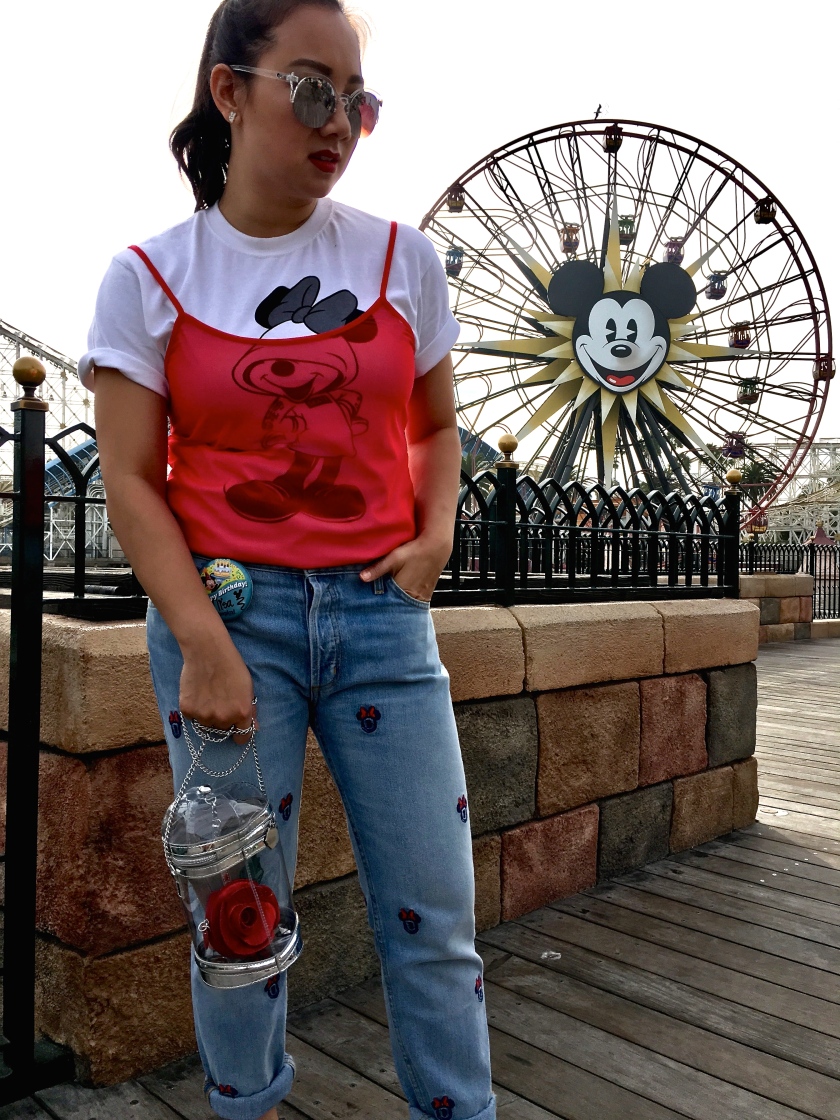 Should I let the way others treat me deter me from wearing girly clothes? Absolutely not.  But the other part of wearing less girly clothes is to limit the amount of defense I have play.  If I encounter someone who starts treating me like a child, all of the sudden I have to make my case on why they should treat me like, I don’t know, a grown adult?!  Yes, I have a major sweet tooth, hate going to sleep when I’m told to, and I like Disney.  But that means I’m a child at heart, not an actual child. 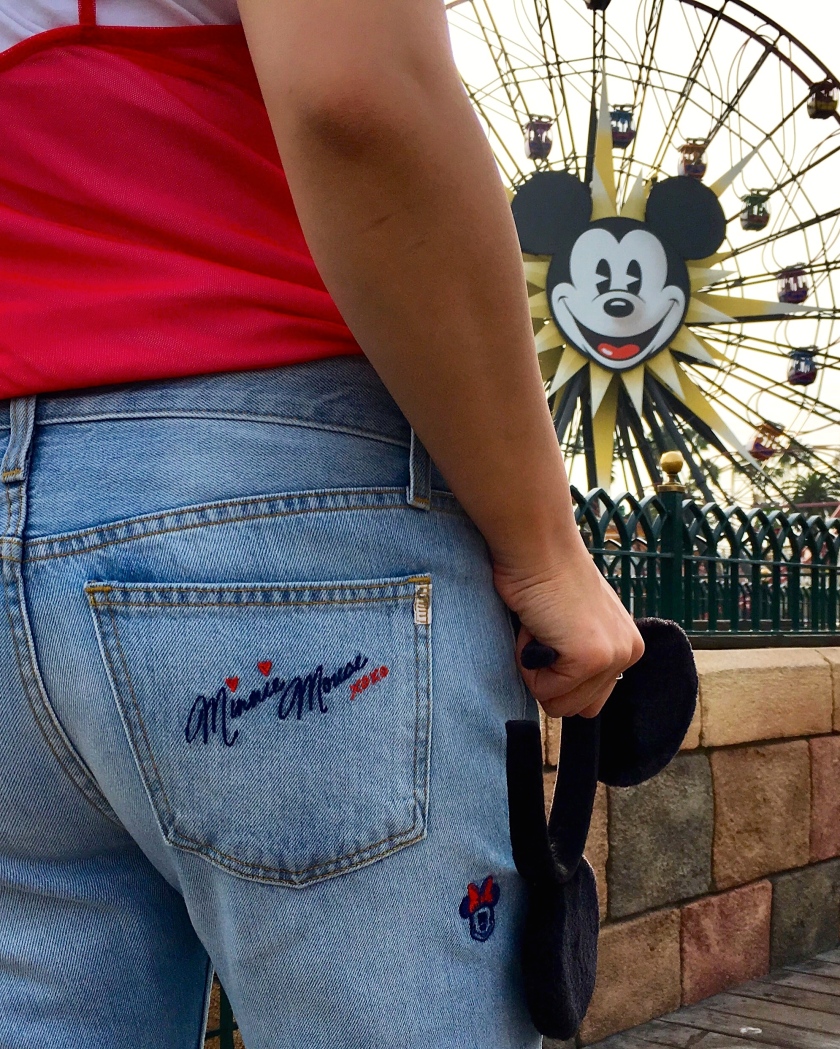 But let’s get back to Minnie.  I’m so glad Minnie finally got her star!⭐️  It was long overdue and just highlights how far behind we were in recognizing the gender disparity between Minnie and Mickey.  So instead of just rockin’ the dots only in January, I’m going to try to let Minnie inspire more of my Disney outfits.  Because the only thing better than representing this iconic fashionista is to shock strangers that dare treat me like a child. 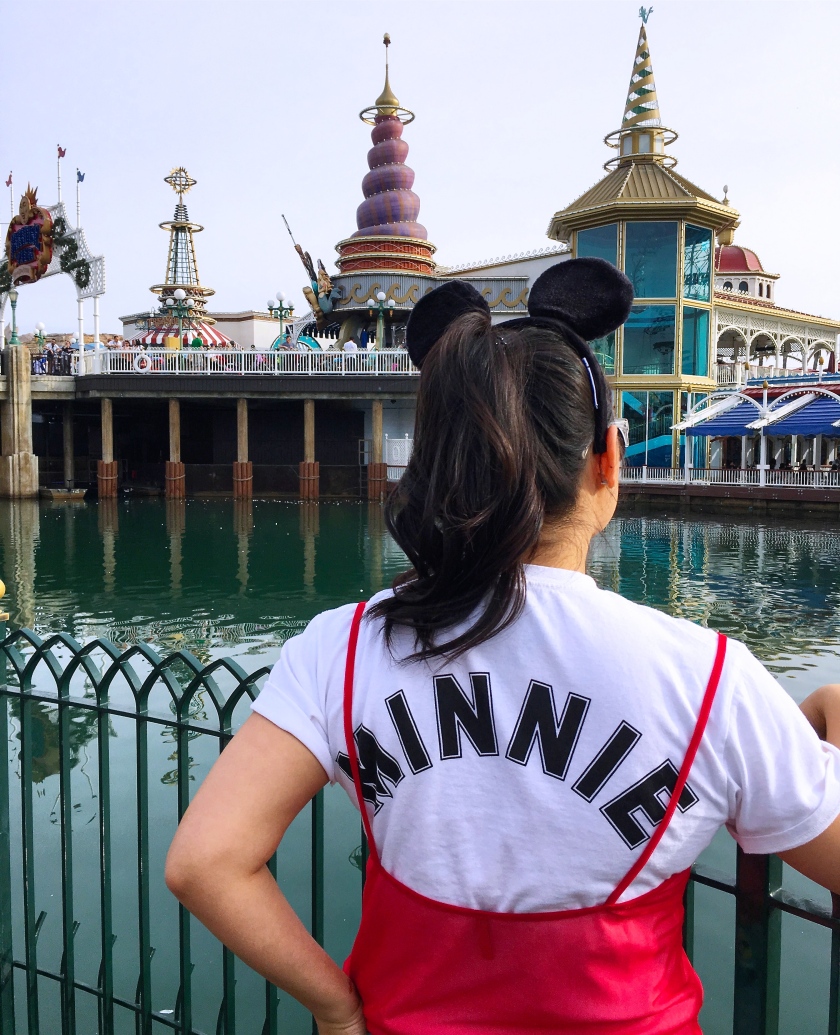 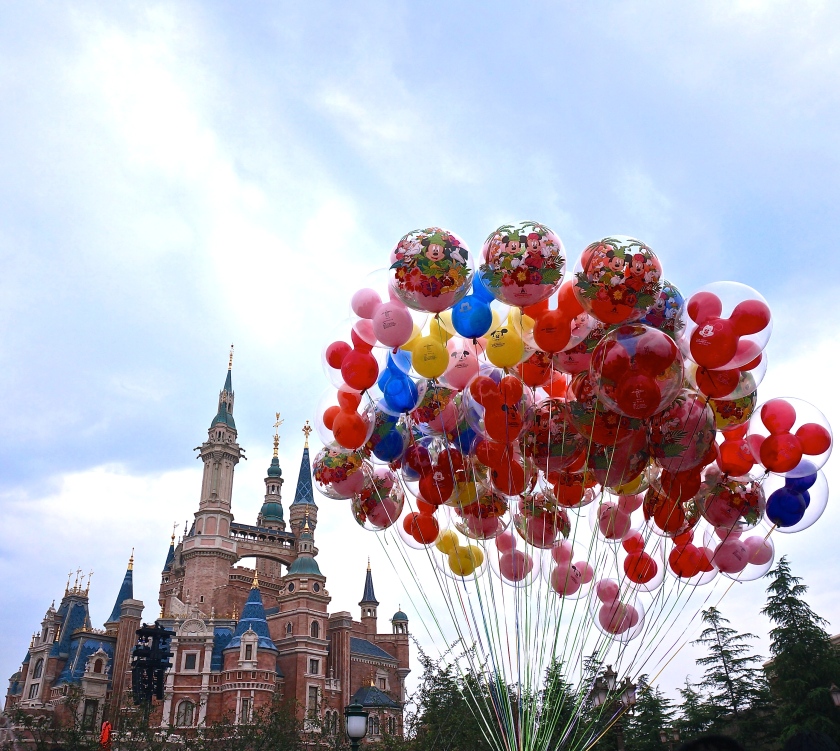 Last year, I was able to travel the world with a close friend to visit all of the Disney parks within a year.  The catalyst for this trip was of course the opening of Disney’s newest park, Shanghai Disneyland.  I thought it would be a few years until I was able to visit again, but last month I was lucky enough to travel to Shanghai for work.  And duh, of course I had to make a special trip to the park.🐭

Now that I’ve visited the park twice, I thought I’d share some of my thoughts and experiences.  And hopefully, this will give you some insight before your first or next visit to Shanghai Disneyland! 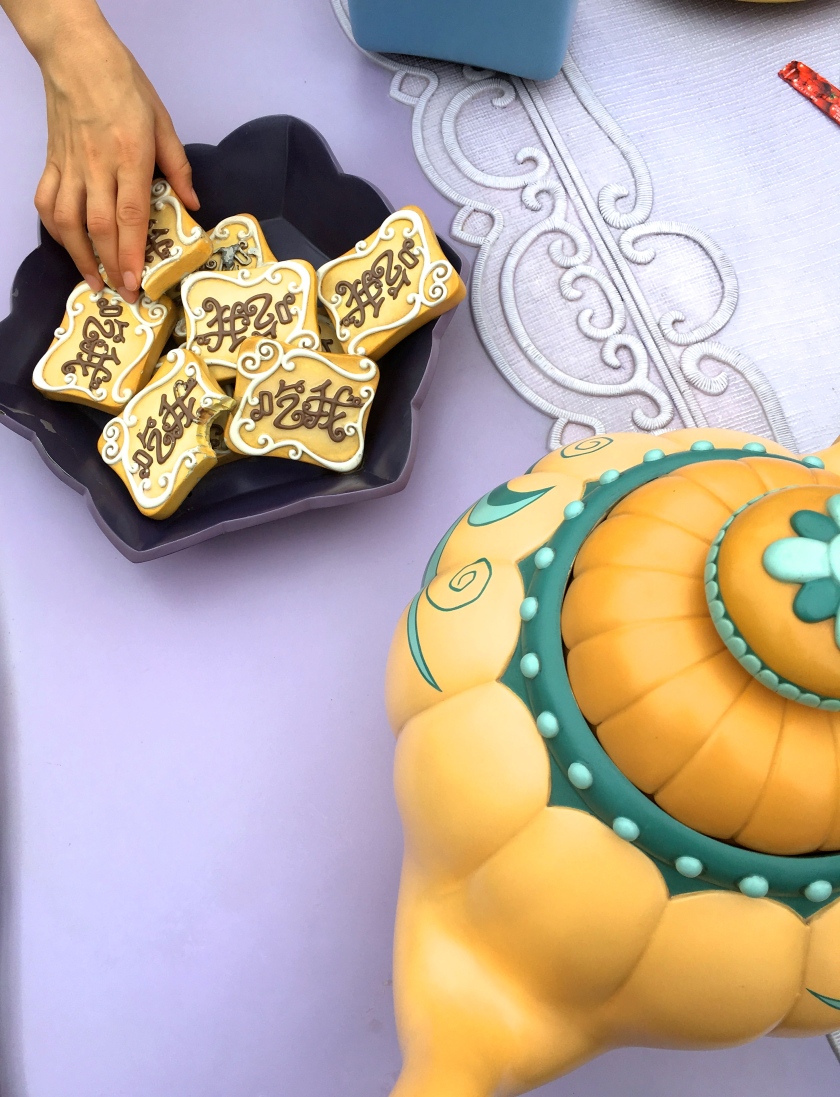 You’ve probably heard already, but parkgoers in Shanghai Disneyland are pushy.  But know that it is not meant to be intentionally rude or mean-spirited, it’s just cultural norm.  So be mentally prepared for it.  There are tons of photo spots around the park and instead of forming a neat line, people crowd around in a circle and jump in once the spot is open.  If you’re in line and there’s space in front of you, people behind you look over your shoulder until you move up.  Or even worse, they’ll try to move around you to occupy that space and essentially cut you.  And again, this isn’t because they’re trying to be mean to you.  It’s more a “take it or lose it” mentality.  If you’re taking to long to get your photo, then I’ll go ahead of you.  If you’re not going to move up in line, then I’ll move up.  In a country where resources are sometimes limited, many grow up feeling the need to be more assertive in taking what they want or risk not getting anything at all.

As an avid Disney park-goer, this is a completely different and somewhat intolerable environment.  My advice is to take it in doses.  It’s much more bearable.  Wait in line for a ride and then go find a place to sit while you eat.  After you finally fight the crowd for that photo, head to Tomorrowland to watch the Tron bikes zoom by for a few rounds (the lights are actually mesmerizing).💫🚴🏻  Just break up your day if possible instead constantly battling the crowds for 10 straight hours. 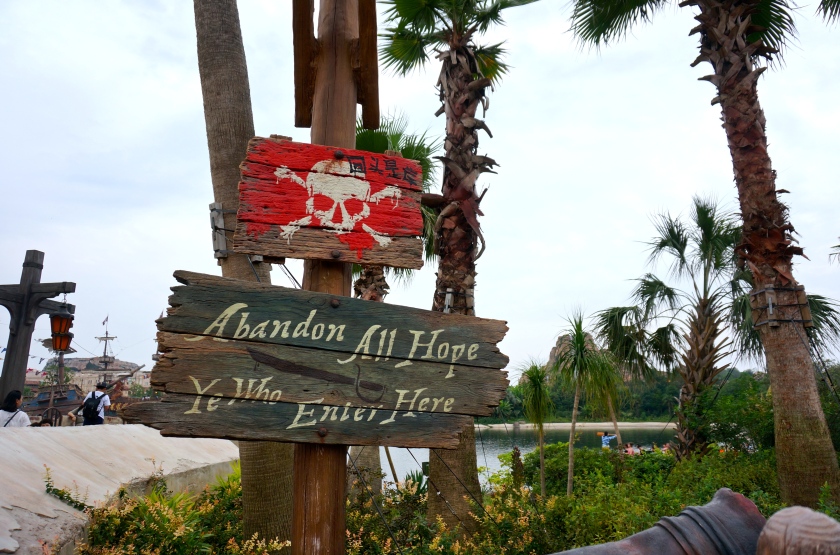 After a while, you might want to start yelling at the crowds.  But just know that security and cast members are not the most involved when it comes to altercations between guests.  Last year, while waiting in line for Tron, a guy cut past me and my other friend. The rest of his group was not far behind and I could tell what was about to happen.  Fed up with pushy guests all day, I grabbed the rail to prevent his friends from passing.  Of course, the guy was immediately upset and started to yell at me.  I sternly explained that his group needed to go to the back of the line.  Or alternatively he could go ahead, but his friends could not.  It was a single-riders line after all and it didn’t matter if they were altogether – they would be split on the ride anyways.  After a few minutes he pushed me backwards.  And this was a full-palm double handed push.  Luckily, his friends were behind me and actually caught me, but my friend and I were literally stuck in this tangled mess of flailing arms and loud yelling.  This showdown happened within earshot of cast members and they did nothing.  No one rushed over to mediate or to assist.  They literally just stared at us.  Not fun.

However, during this past visit, two women began yelling and thankfully it didn’t take long for cast members to show up.  BUT it still took cast members almost ten minutes to actually resolve the situation.  The Tarzan show actually had to be delayed.  And your girl just wants to watch a half-naked man do some aerial arts, so you can imagine how annoyed I was.  At any other Disney park, cast members would have escorted those ladies out in a flash.  But I think park operations are still learning how to handle guests.  So before getting into an argument with anyone, just know that you could be on your own. 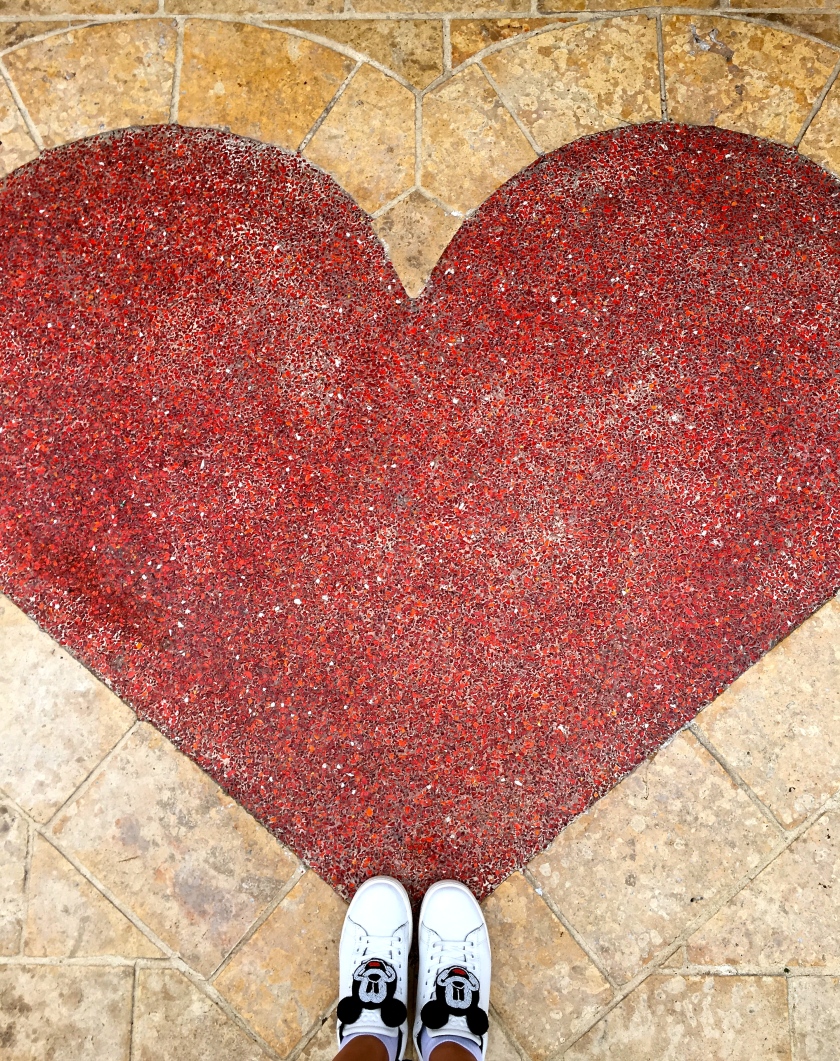 On the flip side, most cast members I encountered were helpful and friendly, IF you approach them politely.  Walking up to a cast member acting like they’re the crazy ones for not speaking English, just sets you up for a bitter interaction.  And believe me, I’ve seen that happen before.  Not a pretty sight.  So please don’t be that “ugly American.”  PUH-LEASE.🙏🏻  We have enough people in the world that hate Americans already.  In fact, try proving everyone wrong.  Show them how humble and polite Americans can actually be.💁🏻  And cast members deal with tons of unpleasant guests all day, that they’d probably be more than happy to assist someone that is actually nice to them. 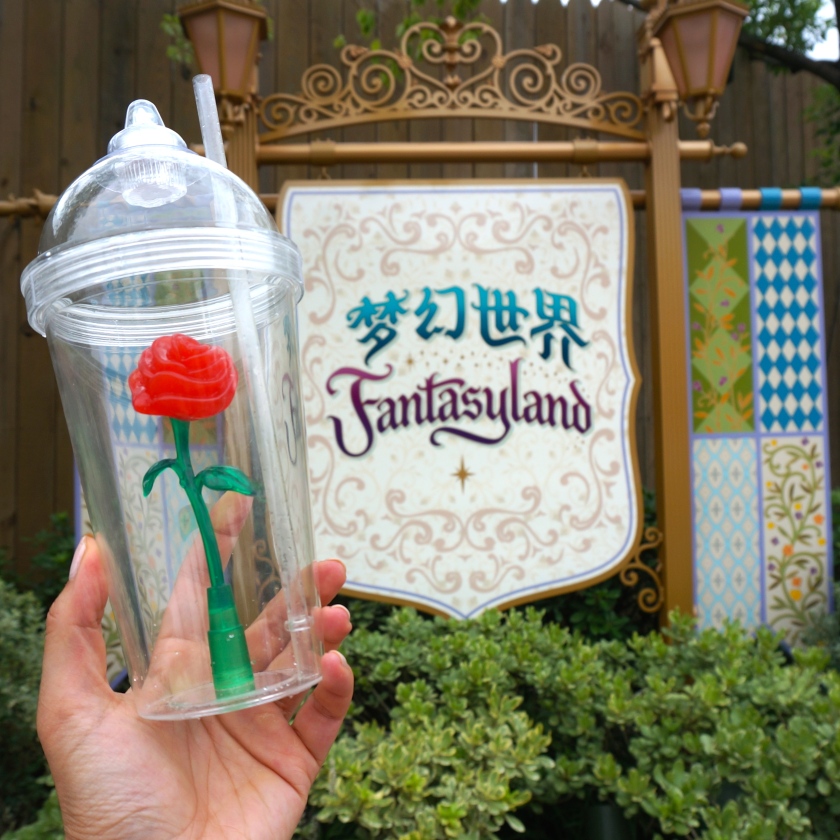 Do you suppose the sign says “Best Cup Ever” in Chinese?

Traveling in China as a Chinese American is an interesting experience.  Everyone expects that you’re just like them, but you’re really…not.  Most people I encountered in China automatically started talking to me in Mandarin.  As an ABC (American Born Chinese), I grew up speaking English.  And on top of that, my grandparents immigrated from Southern China, which means they and my parents speak Cantonese, not Mandarin.  So even if I did know some Chinese, it would still essentially be a different language.

So when I approached someone at the park, I would actually feel embarrassed for a split second.  They would start talking to me in Mandarin and since I couldn’t respond back I stared at them like a dear in headlights.😓  The worst response I’ve gotten goes back to my Tron incident.  The guy that pushed me yelled “You’re Chinese, why don’t you speak Chinese!” while we were arguing.  The “ugly American” in me yelled back “I’m not Chinese, I’m American!”  But I immediately regretted it.  There’s this sense of identity loss if you don’t speak the native language of whatever ethnicity you are.  Not speaking Chinese for some reason makes me less Chinese.  And to some extent I agree.  I’m not Chinese.  I’m Chinese-American.  And that shouldn’t mean I’ve somehow dishonored or disowned my Chinese roots.  Others, of course, feel differently.  But if you’re an Asian that doesn’t speak Mandarin, just be prepared for lots of people expecting you to know the language and to instead dish out lots of humble apologies in return. 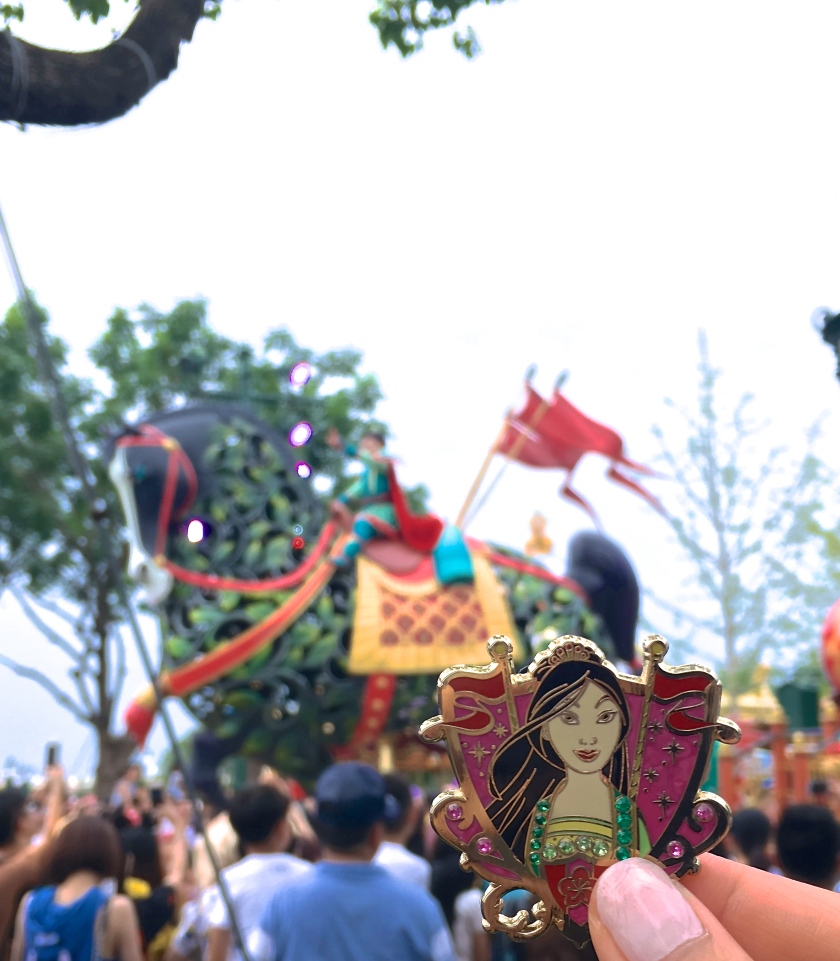 She’s a girl worth fighting for. 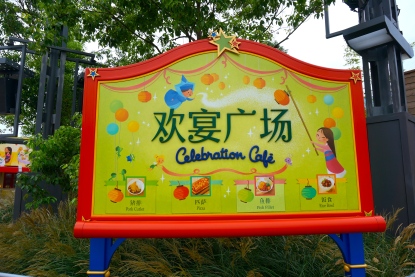 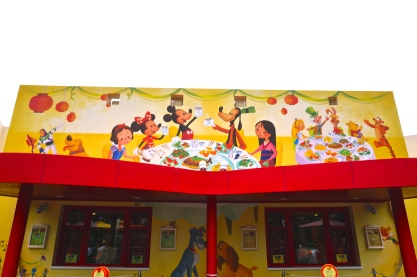 Other than the Pirates of the Caribbean and Tron rides, what I also love about Shanghai Disneyland is how Mulan is much more well-represented around the park.  She has her own spot in the parade, she’s shown in park decor, and is one of the princess stories shown in their storybook attractions.  And in the parade, Mulan is actually wearing her warrior outfit!  Not sure how the parks landed on that, but can we just appreciate the fact that it’s exposing kids to the idea that princesses don’t have to wear dresses?!  It’s also an introduction to non-conforming gender individuals and I’m 💯% on board with that.

But the fact that an Asian Disney character is so well-represented in a Disney park just feels…validating.  Yes, Disney came out with an Asian female led movie, but when she’s barely represented in the parks or in merchandise, it almost feels like Disney was just throwing Asian Americans a bone.  “Here you go, your Asian princess. Now back to our regularly scheduled non-colored princesses.”  We are not a charity case.  I get that Mulan isn’t nearly as popular as other Disney princesses.  I’m a merchandiser, I get that they have sales goals to meet and the safest bets are with white princesses.  But with the new Mulan live-action movie coming out soon, I’m hoping that will change. 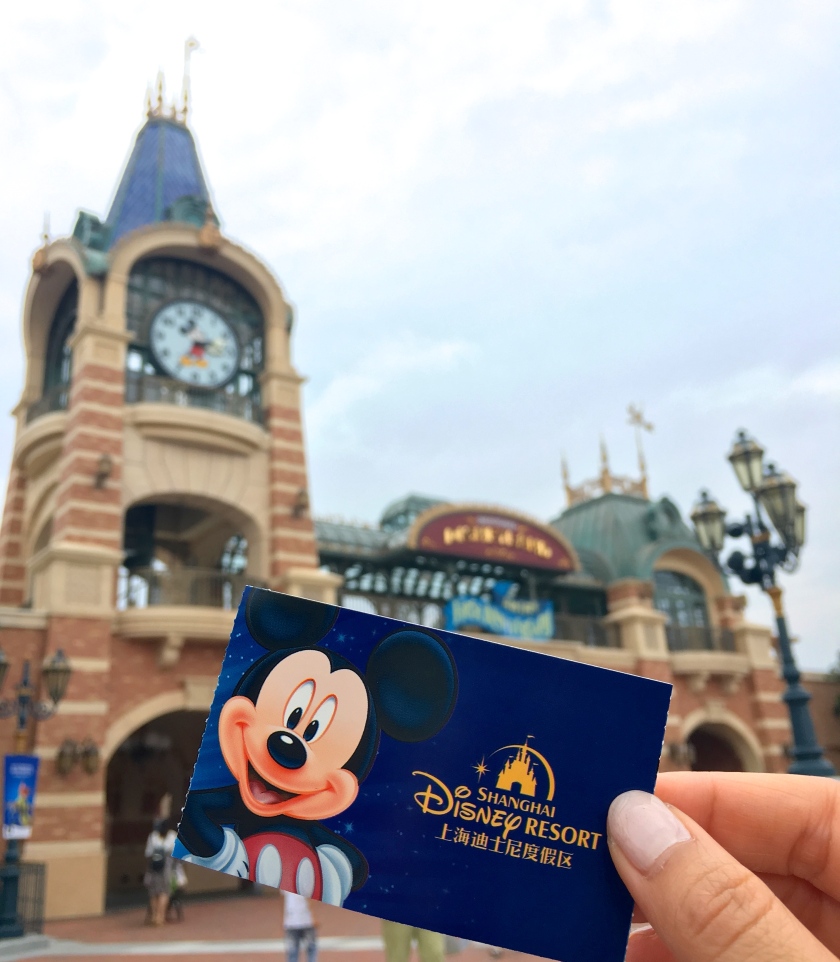 So that is my two cents on Shanghai Disneyland so far.  I’m sure my opinion will most likely change as I visit more and as the park matures.  Overall though, I really do like the park and am excited to visit again since I still haven’t actually done all of the attractions.   And maybe by my next visit, I’ll actually know a little more mandarin!

And stayed tuned for another post about Shanghai Disneyland!  I’ll have tips for your solo trip to the park. 🤗